The Battleship New Jersey Museum and Memorial is an educational and inspiring venue for scouts and students to visit and garner a greater appreciation for those who have served and those that now serve our nation.

Our Guided Tours take guests on a 90 minute journey exploring the Battleship New Jersey and offering a glimpse into her 48 years in and out of service.  Our knowledgeable guides will take your group through the battleship’s legendary 16″ gun turrets, the Admiral & Captain’s cabins, Communications & Command centers, Navigational bridge, wardroom, berthing areas and so much more. On tour, you will learn about the critical role that the Battleship New Jersey played in World War II, Korea, Vietnam & the Middle East.

School & Scout Pricing:   For groups of 20 or more, our students and scouts are priced at $10.00. A complimentary ticket is offered to chaperons for every 10 paying students/ scouts. Additional adults will be offered tickets at our $10.00 rate.

Little Sailors Group Tour:  Perfect for day camps and young elementary school students ages 6 to 8, this tour, which takes approximately an hour, features the 16-inch Gun Turret I, the Officers’ Wardroom, Executive Officers Cabin, Admiral’s Barge, Helicopter and more.  There’s also only one ladder (stairs for your landlubbers) for the kids to navigate and includes “Sailor Says,” our Navy version of the Simon Says game.

“Fish and Ship” Tour Package:
Make it a day on the Camden Waterfront. This popular package features a docent-guided tour of the Battleship and a self-guided tour of the incredible and close-by Adventure Aquarium, showcasing Shark Realm, the thrilling West African River Experience, the Jules Verne Gallery and so much more!

* For groups of 20 or more.
– one complimentary chaperone ticket issued for every 10 tickets purchased at least two weeks prior to visit date

“Ticket to Freedom” Tour Package:
Learn about the document that secures our freedom and a Battleship that defended it! This in-demand package features a docent-guided tour of the Battleship New Jersey and a self-guided tour of the fabulous National Constitution Center (NCC) on historic Independence Mall in Philadelphia. With a live, patriotism-inspiring presentation entitled “freedom Rising” as its centerpiece, the NCC offers over 100 fun, interactive exhibits designed to increase the understanding and appreciation of our nation’s Constitution.

Groups can customize their visit by choosing from a few special features.

Choose from these great add on features:

Scavenger Hunt:
This hunt will take your group deeper into our incredible museum exhibits. Each exhibit area has 2 questions & the answers are found by paying close attention to what is displayed. Recommended for ages 8-13. Adults are free to assist children.  Cost: An additional $2.00 per student with a group tour ticket.

“I Was There” Veteran Interaction:
History comes alive during the “I Was There” program! Suitable for groups of 20-50 people, this unique experience gives your students the chance to meet and interact with a veteran of the United States armed forces. In this 40-minute program, participants will learn first-hand what military life was like and will have the opportunity to question a veteran on a broad variety of topics.  Recommended for ages 8-17.  Cost: $3.00 per student with a group tour ticket. Adults are free.

Engineering a Battleship:
Can you do a better job designing a battleship than the men who designed USS New Jersey? Recommended for grades 6-12, look at the various parts that go into building a massive warship and examine the 3 primary components of a battleship: massive propulsion, impenetrable armor, and unrivaled firepower. Use this knowledge and mathematics to design your own battleship factoring in the problems that the designers of real ships faced.

Circuits and Energy Creation:
Electricity powers our lives but do you know how it works? Recommended for grades 4-8, this program consists of a tour of the ship including the ship’s previously off-limits engine room. This program contains 3 hands-on programs: make homemade batteries, creating circuits, and experimenting with how electricity can make a ship waste away in front of your eyes.

Finding Your Way:
The ship is a maze, can you find your way out? Recommended for grades 2-5, this program is intended for younger sailors and includes a tour of the ship, including spaces not normally on the tour route, as well as three hands-on components. Learn how to read blueprints of the ship to find out where you are on board, read a world map to look at where the ship went over the course of its five-decade career, and read charts to examine the local waterways the ship traveled while discussing hazards the crew needed to avoid.

Life at Sea:
Have you ever wondered what it’s like to be a sailor? Recommended for grades 1-5, this tour visits crew spaces from berthing, where you can try to fit in a sailor’s bed to the post office, to the ship’s hospital. Maybe your battle station will be in the combat engagement center firing missiles, or maybe it will be on a repair party saving the ship from flooding. This tour has 2 hands-on components allowing participants to learn how ships float and compete in keeping their own designs afloat as well as a program on the role of Damage Control aboard.

High Water:
In December 1944 New Jersey faced an opponent just as deadly as the Axis but far more difficult to fight, Typhoon Cobra, which sunk three ships in her task force and damaged many more. Recommended for Grades 7-12, this program consists of a visit to the Bridge, 54 feet above the waterline, where waves broke overhead, the Expansion Joint, which allowed the ship to twist and flex and sea threw her around, and the ship’s boats used to rescue sailors washed overboard. Learn how to use damage control techniques to stop flooding, use a barometer to predict the weather, and experiment with buoyancy to see how much weight a ship can take before it starts to sink. This program culminates in an analysis of interviews with sailors who survived the typhoon, including future President Gerald Ford, and looks at how other ships experienced the same event.

Is an Overnight Stay on the Battleship right for your group? Check out our Overnights section. 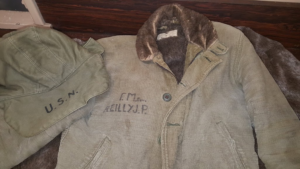 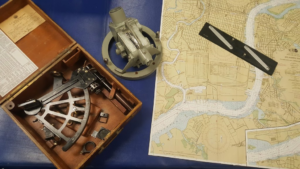 In honor of our new exhibit, USS New Jersey: Past, Present and Future, this month’s Building History project is focused on the first USS New Jersey, BB-16, which was in commission from 1906 to 1920, and … Continued