“My special sea detail was on the anchor, and my job was to operate the brake to lower or raise the anchor.  The best I can remember, it was about day break when the word was passed to man the special sea and anchor detail.  As soon as we got to our station, we could see North Korean shells hitting nearby the ship.  The word came down from the bridge…   “let go the anchor Bos’n!” and Chief  Warrant Bos’n H.J. White (he was from Mississippi,) told me to let the brake off, and by then we were backing down at flank speed.  When the end of that anchor chain cleared the chain locker, it flew up and over, and took a bite out of the gunwale.  And so we left our starboard anchor and chain back in Wonsan Harbor…  One thing that still bothers me today, is why did we anchor in harm’s way?

Now at about this time, GQ was sounded and we manned our battle stations.  We didn’t leave the area… we stayed around long enough to take care of the guns that were firing at us.
The Chaplain was our battle narrator.  He would get on the P.A. system, and relay the info to all of us that were inside the ship and couldn’t see what was going on.  When he passed the word that we were receiving fire, and had taken a hit on Turret #1, I got very concerned as my younger brother, GMSN Neal Adams, was a gunner in that turret.  But as it turned out, he was OK, and he told me later that he didn’t feel a thing when it hit.

My job when we were steaming, or in port, was as the air test crew.  Each quarter, a number of compartments had to be tested for water tight integrity.   Now there are a lot of compartments in a battleship, and many of them are not easy to get to.  On some of the tests, I would have to have a man hold a ball of string, and I would take it with me so that I could find my way back out.
When we were on our way back stateside, my enlistment was up, and I was going to call it a career.  But the word came down that President Truman had extended us all for another year, so I re-upped for six more.
I retired in 1967, and went to work deep sea diving, but this didn’t last long.  They were not as concerned with our safety… they just wanted the job done.
My last few years I worked in civil service as an aircraft mechanic overhauling helicopters… I am 80 now, and my health is good. 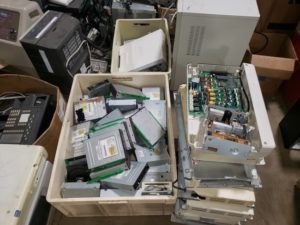 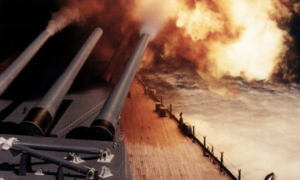 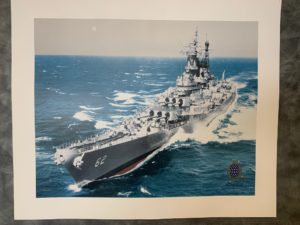 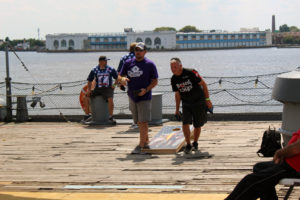 Come join us for the Big Guns Cornhole Tournament aboard the Battleship New Jersey. We will be playing under a large tent on the fantail of the ship. So the event will be rain or … Continued

The Battleship is open for tours every day from 11am - 3pm. Add a free guided tour of turret II or an engine room on weekends.

Pull the trigger to fire a salute from the ...

Pull the trigger to fire a salute from the portside saluting gun on Saturday from 12pm to 2pm. Just a $50 donation to the @battleshipnj , a non-profit museum and memorial on the Camden Waterfront. ...

Sound powered phones are a useful form of ...

Sound powered phones are a useful form of communication through a ship. With no electricity required, these phones can be found in most compartments on board for communicating from one space to another. But just because they are sound powered doesn't mean you need to yell. ...

Happy Mother's Day from the Battleship New Jersey. These are handouts from Mothers Day on board during the ship's service. ...

#happymothersday❤️ to all moms from the ...

To celebrate May, which features Armed Forces Day,...