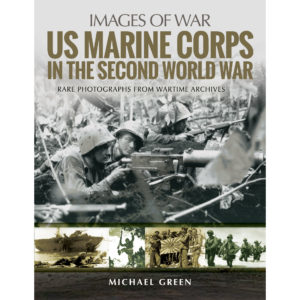 US Marine corps in the Second World War

The United States Marine Corps played a leading role in the war against Japan from Pearl Harbor in December 1941 until VJ Day on September 2, 1945. Living up to its motto the “First to Fight,” the 1st Marine Division landed on the Japanese-occupied island of Guadalcanal in the south Pacific on August 7, 1942 and fought its way up the central Solomon Island to Cape Gloucester in the territory of New Guinea.

In November 1943, the Marine Corps captured Tarawa Atoll and so began their advance across the central Pacific, fighting many famous and bloody battles such as Saipan, Tinian, Guam, Iwo Jima, and finally the 82-day epic struggle for Okinawa. These victories came at high cost, with 19,737 Marine killed and 67,207 wounded.

This classic Images of War title presents a graphic overview of the Corps’ legendary campaign in text and contemporary images. The author expertly describes the full range of Marine Corps weaponry and explains their organization, tactics, and fighting doctrine.