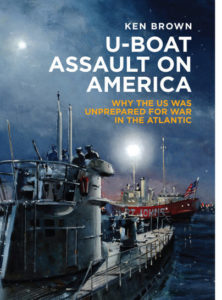 Author Ken Brown will do a presentation on his book, “U-boat Assault on America,” in the Officers’ Wardroom on Saturday, December 16 from 10am to 2pm. The presentation is free for anyone taking a tour of the Battleship.
Ken Brown has had a long fascination with naval history and has been conducting research on U-boats off the East Coast of America for more than three years. He has had articles published in World at War Magazine on unrestricted submarine warfare by the United States in WWII, and on the loss of SS Normandie. He lives in New York and this is his first book.
The “Second Happy Time” was the informal name given to the phase of the battle of the Atlantic when German U-boats attacked both merchant and U.S. naval vessels along America’s east coast. With tankers burning and petrol rationing in New York City, the U.S. Navy seemed powerless to stop the deprivations of Hitler’s marauding U-boats.
Ken Brown seeks to explain how the United States responded to these deadly assaults and looks at the steps that the Navy Department took to train the men, harness the scientists, and make the organizational changes that were required to defeat the German threat.
Mr. Brown will have some books for sale and will sign them for guests on Saturday.
For more information or to buy the book online, visit: https://www.pen-and-sword.co.uk/U-Boat-Assault-on-America-Hardback/p/13577