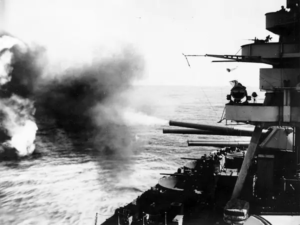 In continuation of the Battleship New Jersey’s commemoration of the 75th anniversary of the end of World War II, the ship will host a ceremony at 9:30am on Saturday, Feb. 22. The keynote speaker will be WWII veteran and a participant in the Battle of Iwo Jima, Frank Beach. The Battleship will remember our military heroes who gave the ultimate sacrifice with the casting a wreath into the Delaware River, a 21-gun salute by the PFC Daniel Giordano Marine Detachment Rifle Team, and the performance of TAPs on bugle.
The ceremony will take place in the Officers’ Wardroom and is free for guests to attend.
Further, the Battleship will be real-time posting on Twitter some of the events of the Battle of Iwo Jima on Feb. 17.
The American goal of the battle was to gain control of the island and its airfields to allow the Americans to have a staging location in order to attack the Japanese main islands. Over five weeks, this battle had some of the bloodiest fighting of the war in the Pacific. During the battle, New Jersey participated in the shore bombardment of the island