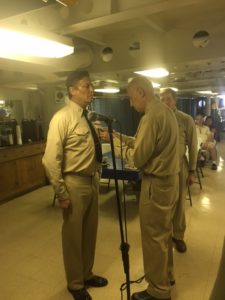 Come celebrate victory in World War II aboard the Battleship!  Guests touring the ship will meet WWII re-enactors, check out WWII artifacts and even enjoy 1940s-era music over the pier’s PA.  All WWII activities are free when you purchase a tour of the Battleship.

Enjoy a BBQ and Dance as we celebrate victory on the fantail (tented deck). A delicious BBQ lunch with all the fixins, cash bar and a Sinatra performance by Steve Ritrovato. Lunch tickets are $30 for adults and $24 for kids 16 and under. 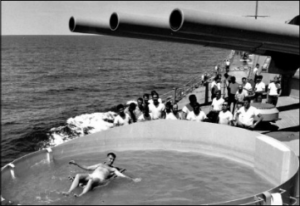 Bring your bathing suit and take a dip in the Battleship pool! We are opening the pool for swimming on Saturday, August 18 from noon to 3pm! We’ll also have ice cold Buds and Bud Lights, compliments of Budweiser. Just $3 a beer. Soft pretzels will also be available for purchase.

Free to enjoy with the purchase of any tour of the Battleship New Jersey, open daily for tours from 9:30am to 5pm.

The pool was erected to celebrate the 50th anniversary of Capt. Snyder turning two gun tubs into pools during the Vietnam War. The pool will be coming down in a couple of weeks. 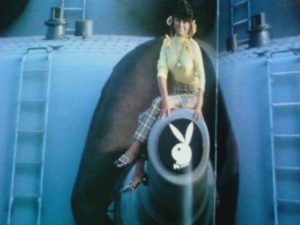 Experience the adult-side of the Battleship during this Curator-led tour on Tuesday, August 21 at 6pm.  Adults will see sailor art, hear stories like the Playboy Bunny who visited the Battleship, and even enjoy a cold beer, glass of wine or soft drink on the deck at the end of the tour.  Tickets are a $34.95 donation.  Free parking!  To purchase tickets, click the Visit page on this website or call 866-877-6262 ext. 108. 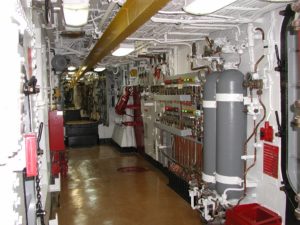 Take a walk down Broadway at the end of the Turret II Tour, launching Wed., Aug. 22, at 11am. This guided tour will bring you five decks to the bottom of the massive 16-inch gun turret. Along the way, you’ll load powder bags, plot a firing solution, pull the trigger to simulate the firing of this giant gun & even walk down the longest and most interesting passageway aboard the Battleship New Jersey. $29.95 per person. For tickets, visit www.battleshipnewjersey.org or call 866-877-6262 x108. 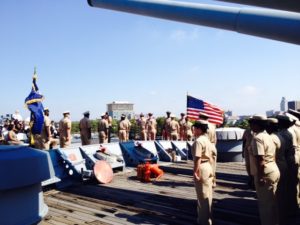 The U.S. Navy Chief Petty Officers, in conjunction with the Navy’s newest Chief (Selects) will conduct a POW/MIA formal ceremony on the forecastle (forward deck) on Sunday, Aug. 26, 9:30am. The event is the culmination of a 3-day encampment aboard the BattleshipNJ.

A Navy Chief will perform TAPS on a bugle and a Trooper from the New Jersey State Police, Pipes and Drums of the Blue & Gold, will perform Amazing Grace and other selections on the bag pipe. A memorial wreath will also be casted upon the Delaware River to remember those sailors who gave the ultimate sacrifice.

Among the distinguished guests in attendance, will be the U.S. Navy Reserve Force Master Chief, Christopher Kotz, who will participate in a traditional passing of the American flag and Senior Chief Petty Officer Phares, a sailor aboard the USS Pueblo when it was attacked and captured by North Korean forces on January 23, 1968.
Senior Chief Phares was one of 83 crew members captured that day. One crew member was killed in the attack. The Senior Chief will recount that experience, which took place 50 years ago, while speaking aboard the Battleship.

The ceremony is free to all guests to attend. 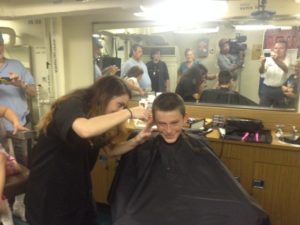 Just in time for Back-to-School, we’re offering complimentary buzz cuts in the Battleship’s Barber Shop for guests on Saturday, Sept. 1 from 10am to 2pm.

The ship’s barber will be cutting hair in the Barber Shop, located aft, two decks below the fantail. Admission to the ship and to the Barber Shop is free to those who are getting a hair cut or supervising kids getting their hair cut.

Add on a tour of our nation’s most decorated battleship when you visit for a cut! Experience the massive 16-inch gun turrets, track a tomahawk missile launch in the Combat Engagement Center, learn how the crew lived aboard this floating city and more! 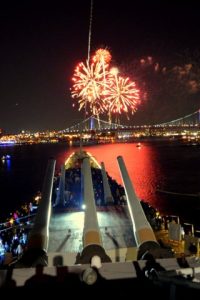 Experience the unique view of the fireworks show on the evening of Saturday, September 1, from the deck of the Battleship New Jersey!

We’ll have face painting for the kids, bar service for adults, music food concessions and even take a chance to fire the Saluting Gun at the end of the show! Just a $10 donation, which goes to the on-going preservation of the Battleship, a non-profit museum and memorial, gets you aboard!

Battleship Members can enjoy complimentary admission to the fireworks show on Sept. 1 Just show your Membership card at our Ticket Office.

Tickets are available at www.battleshipnewjersey.org or by calling 866-877-6262 ext 108 or at the Battleship Ticket Office daily from 9:30am to 5pm and before the fireworks on Sept. 1 until 9pm. The Battleship will open her deck at 7pm. The fireworks should begin at approximately 9:30pm. 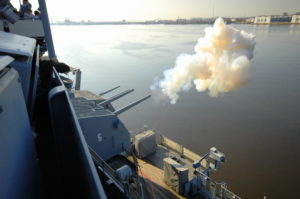 The Battleship is celebrating Delaware River Day by allowing a guest to fire the ship’s saluting gun every hour from 10am to our closing at 5pm on Sunday, Sept. 2.

Guests can also enjoy a free tour with the purchase of an adult Fire Power tour on Sunday, Sept. 2. 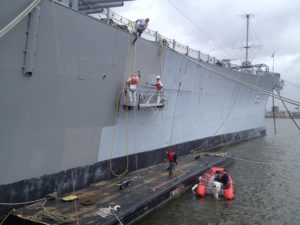 As a thank you for the support from local unions, the Battleship will offer complimentary self-guided tours to union members on Labor Day, Sept. 3.

Union members need to show a valid ID at the Battleship Ticket Office for their complimentary tours. 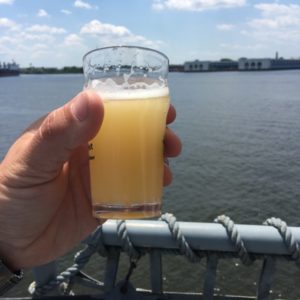 The event is rain or shine, and the beer is served in the fantail tents. But you will be outside to walk up to the ship, so bring your weather gear!

See you for a toast aboard the Battleship! 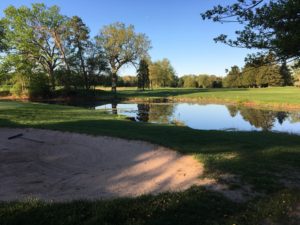 The event will feature lunch, a cocktail reception, lots of prizes, an awards dinner and some great golf on a magnificent course. Plus all proceeds go to the on-going preservation of the Battleship, a non-profit museum and memorial.

Experience the adult-side of the Battleship during this Curator-led tour on Thursday, September 20 at 6pm.  Adults will see sailor art, hear stories like the Playboy Bunny who visited the Battleship, and even enjoy a cold beer, glass of wine or soft drink on the deck at the end of the tour.  Tickets are a $34.95 donation.  Free parking!  To purchase tickets, click the Visit page on this website or call 866-877-6262 ext. 108. 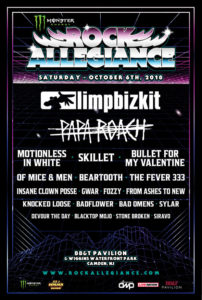 The Battleship will welcome VIPs of the Rock Allegiance Music Festival on Saturday, Oct. 6. These special guests, who attend the concert featuring Limpbizkit and Papa Roach at the BB&T Pavilion, will get a complimentary tour of the Battleship throughout the day! We’ll also have food concessions and cash bars on the pier and fantail (tented rear deck). The Battleship will be open for VIPs from noon to 8pm.

For information on the Rock Allegiance concert and VIP tickets, visit https://rockallegiance.com/ 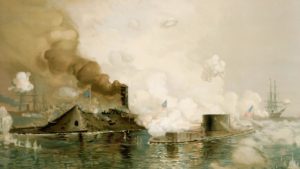 The Battleship New Jersey will host a Civil War Navy Symposium on Saturday, Sept. 20 from 9am to 4:30pm. The event will include presentations on the Blue Water Navy and Brown Water Navy from Civil War historians, such as Dr. William M. Fowler Jr., Chuck Veil, Dr. Timothy B. Smith, and Dr. Gary D. Joiner. There will also be displays, living history exhibits, musical performances and lunch, all on the historic fantail (tented rear deck) of the Battleship.

General Admission tickets are $45 per person.

For more information on the Symposium, visit www.oldbaldycwrt.org.

This night, the girls are in charge!

Your Girl Scout troop is invited to a spend a fun, educational and totally cool night aboard the Battleship New Jersey!  Our award-winning overnight encampment program features dinner and breakfast served from the chowline, a guided tour of the Battleship, and the opportunity to sleep in the bunks that the crew of the USS New Jersey once did!

Plus, girls can participate in a USO-style show, complete with performers and learn about how women helped build the Battleship during WWII.  Girl Scouts will also get a “Women Serving Our Nation” patch!