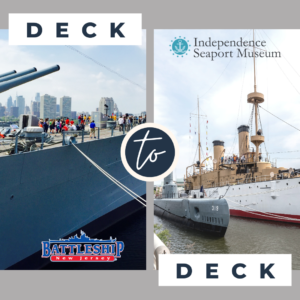 Did you know there are nearly 100 years of naval history along the Delaware River?
Join the Battleship New Jersey and Independence Seaport Museum for a Deck-to-Deck Tour, where you’ll be able to explore that history up close through guided experiences aboard three remarkable ships, prime examples of naval ingenuity.
All Deck-to-Deck Tours will start aboard the Battleship New Jersey at 3:00 P.M.
Available these select dates: Sept. 3, and Nov 5.
Tickets are a $100 donation