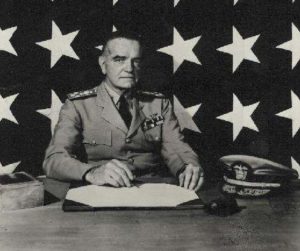 The Battleship will honor our veterans with a ceremony along the promenade leading to the historic ship, where there will also be an unveiling of new banners recognizing Veterans from throughout New Jersey.  The ceremony will begin at 11am on Veterans Day, Nov. 11.

Battleship volunteer Nan LaCorte will start the ceremony with a rendition of the National Anthem on her bugle.  She will also perform TAPS as a memorial wreath is casted upon the Delaware River.  The ceremony is free to attend.

Veterans can also experience a tour of the Battleship for a donation of any amount on Veterans Day, Nov. 11.  The Battleship is open daily for tours from 11am to 3pm.

The new banners, sponsored by Sheet Metal Workers Union  Local 19, feature  the images of 22 Veterans and others from throughout the Garden State.  These include Adm. William F. Halsey Jr., who called the USS New Jersey his Flag Ship during WWII, WWII Medal of Honor Recipient USMC Sgt. John Basilone,  Four-Star Adm. William J. Fallon, Hilda P Griggs, member of the first and only all-African American Women’s Army Corps (WAC) during WWII, and Lilian Carson, a “Rosie the Riveter” who helped build the USS New Jersey at the Philadelphia Navy Yard.  Also recognized on the banner will be the Battleship’s Overnight and Gun Crew Manager, Ken Kersch, who served aboard the USS New Jersey during the Vietnam War,  Russel Collins, who served aboard the New Jersey during WWII and then volunteered on the Battleship until passing in Dec. 2017, and Bob Waters, a Navy veteran during the Korean War who also served in the Curatorial Department of the Battleship New Jersey Museum and Memorial.

The banners will fly along the promenade of the Battleship for at least one year.  The Battleship plans on honoring other Veteran heroes in future years.  Guests can also request a booklet with additional details on all of the Veterans honored on the Battleship’s Promenade Banner.  The booklets will be available in the Ship’s Store.