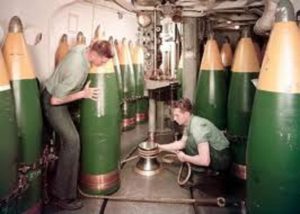 Join a knowledgeable tour guide in a 90-minute, family friendly, walking tour that takes guests through the five stories of one of Battleship New Jersey’s massive 16″ gun turrets. Visitors will get to stand in the armored gun house where the gun captain oversaw reloading procedures, explore the magazines where 1-ton shells and thousands of powder bags were stored, and pull the triggers in the plotting room where primitive but effective computers aimed the guns over the horizon. This fun for all ages experience includes many hands-on elements that let’s guests see and feel what it was like for a World War II crew member to fire the ship’s guns. Tickets are limited and will sell out quickly. 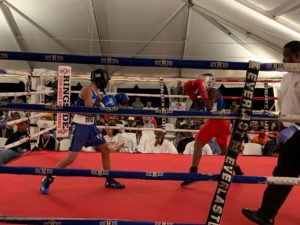 Boxing on the Battleship has been rescheduled to Sunday. August 28 at 4pm.  Tickets purchased for the Friday, August 12 event will be accepted at this new date.

R&B Promotions is pleased to announce a unique and new professional boxing series that will take place on The Battleship New Jersey in Camden, New Jersey on Friday, August 12th.

“We are very excited to jump into pro boxing promotion. We have done several successful amateur shows, and having fights on the Battleship New Jersey is a different experience that the fans will really enjoy. We are featuring young and hungry fighters, and I could not be happier about the show on August 12th,” said Barbosa.

Heading up the event will be undefeated welterweight Tahmir Smalls taking on Andres Viera in a six-round bout.

Smalls of Philadelphia is 8-0 with five knockouts. Just 23 years-old, Smalls is coming off a first-round stoppage over Roque Agustin Junco on June 24th in Philadelphia.

Viera of Montevideo, Uruguay is 11-5 with eight-knockouts.

Viera, 38 years-old, is a six-year professional.

In a six-round co-feature bout, Danny Murray (5-6, 4 KOs) of Lanoka Harbor, NJ takes on Michael Gibbons of Atlanta (0-0-1) in a junior welterweight contest.

Timothy Tyler (0-1) of Camden, NJ will take on Tyrone Lewis (0-2) of Philadelphia in a welterweight contest.